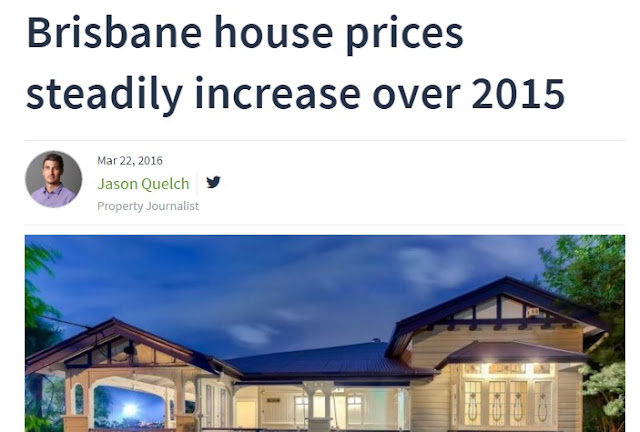 It seems that some people, including people like me in fact, are getting a little hung up on the idea that unit prices will underperform house prices in Brisbane over the near future, probably not helped by quotes from, um, people like me.

In general terms and at the macro level, yes, I expect house prices in Brisbane to outperform units, as I noted in the above article.

However, property prices don't go up (or down) because the dwelling type is a detached house, townhouse, apartment in a boutique block, or high rise unit.

Prices move when there is sustained demand for a property type from a buying demographic in a location where that type of supply is constrained.

In particular, since prices are ultimately a derivative of land values, properties with a high and appreciating land value content are likely to outperform over time.

For example, I'd rather own a quality townhouse or apartment in a boutique block in New Farm or Tenerriffe, than a crumby house in a fringe location with dim prospects.

After all there is virtually no new land on the peninsula to be developed, and with that area becoming ever more sought after over time land values are realistically heading in only one direction.

I also expect townhouses and some boutique attached dwelling types in middle ring locations to do well over time.

Affordability is not quite as big an issue in Brisbane as people like to pretend it is.

It's not that hard to find properties in prime, commutable, middle ring locations selling for well under their "as new" prices from early 2009.

And, by the way, the cost of borrowing money has halved since then.

Of course capital cities always seem expensive, not least because we have a tendency to look at homes in areas which are just tantalisingly beyond our reach (remember all the articles from around 2008 noting that Sydney prices couldn't rise any further?).

On the other hand, as discussed here many times before, there is indeed masses of construction of high density dwellings in some inner city locations, including at Brisbane's South Bank for example, with the ratio of new to existing apartment stock too high for comfort.

It remains to be seen how much of this new stock ends up in the hands of foreign buyers and never makes it to the rental market, or how much of it ends up being international student or "short stay" accommodation.

Either way, when lenders are striking out suburbs as no-go zones and even the central bank has highlighted systemic risks, it's probably time to be setting your sights elsewhere!

The capex cliff progressed another $50 billion or so towards ground zero as Woodside (ASX: WPL) announced yesterday that it will shelve its Browse LNG project off the Kimberley Coast, citing the unfavourable economic environment.

Stacks of interesting information out this morning, although most of it is not market moving, including demographic statistics for Q3 2015, detailed labour force figures, and the household finance and wealth data from the national accounts.

Lots to look at there, so stick around.
Posted by Pete Wargent at 08:12