Asian Century tees off in Australia

The January Overseas Arrivals & Departures figures revealed that permanent immigration into Australia continued to slow into the beginning of 2016, with a net +268,400 permanent and long term arrivals now tracking more than a third below the peak.

There were some 13,610 permanent departures in January, the highest on record, although ABS research shows that most "permanent" departures actually return to our shores within a year. 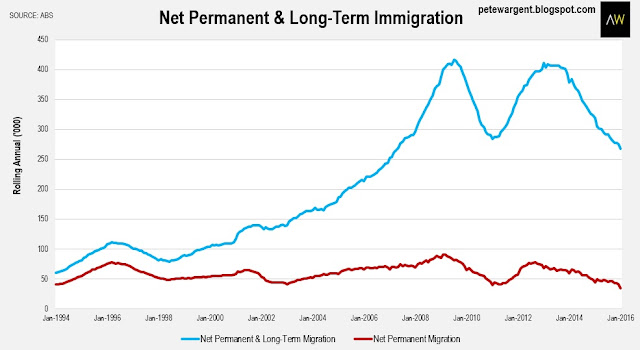 The composition of immigrants continues to shift away from New Zealanders and Britons, and towards permanent settlers of Asian origin, now accounting for a record 57.7 per cent share over the past 12 months. 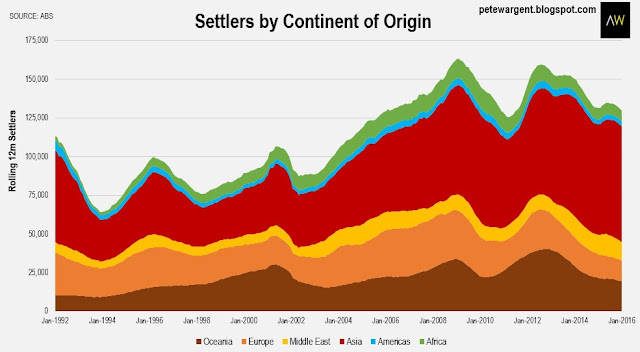 
Despite the soft headline figures those hoping for a significant decline in Australian population growth are likely to be disappointed, with the wider picture being that population growth will probably only slow from extremely strong to strong.

Indeed, after accounting for the rapid growth in student visas, total population growth in Australia is probably already rising again.

In the year to January the number of short term arrivals blazed past 7.5 million for the first time in recording another strong +8.6 per cent rolling annual increase.

The number of short term departures is still creeping up, but a much more sedate pace, implying an exchange rate driven rebalancing. 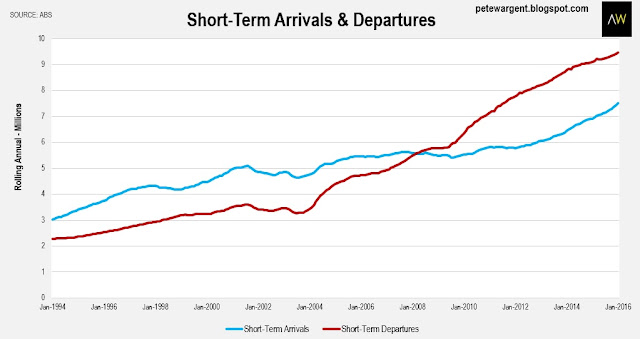 There was a huge increase in the number of holiday makers to Australia in the year to January of +442,000 taking the annualised total up to a fresh high of 3.57 million, while an additional +119,400 folk came to visit friends & family, taking the total for this category up to a record 2.04 million. 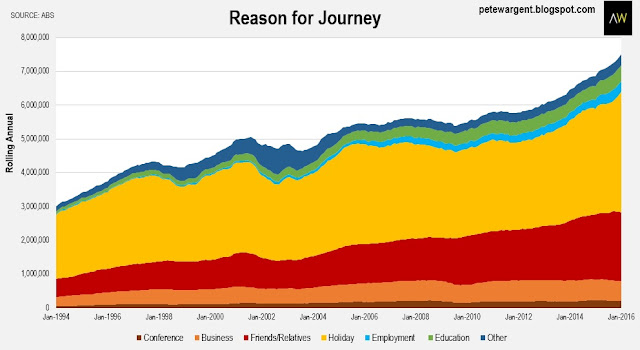 The key reason that population growth is unlikely to slow is the vast projected boom in international students.

There were some 55,000 education arrivals in January, by a huge margin the biggest January on record, and it seems to be a nailed on certainty that 2016 will be the greatest ever year for the enrolment of international students.

More relaxed visa rules mean that many thousands of these students will end up becoming permanent residents in time. 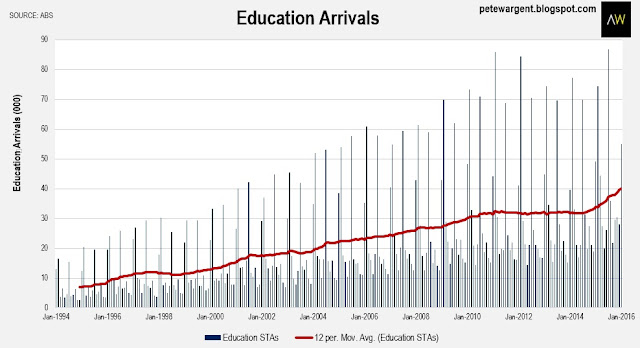 Last, but certainly not least, the explosion in visitors from China has virtually torn the roof off, with an astonishing +57.3 per cent increase from January 2015. 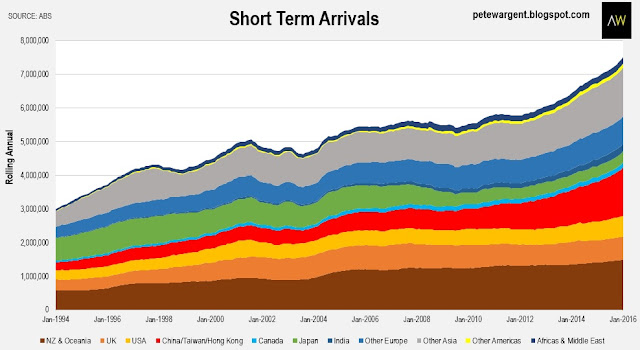 Naturally the most popular month in the calendar year for Chinese visitors will be February, due to the lunar year. The raw original data show that Chinese visitors in that month have ramped up at an astonishing pace:

It seems likely that Febuary 2016 was another record-breaker, but we'll have to wait another month for the official confirmation of that.

The full suite of figures appear to tie with DIBP forecasts of population growth bottoming out at somewhere close to 300,000 per annum, before increasing strongly over the remainder of the decade.

It is important to note that most of the population slowdown has been in mining and resources regions - the largest capital cities have barely experienced any slowing at all to date.

Evidently the composition of immigration moving forward will be very different, with Asia being the key driver of population and tourism growth.

Chinese iron ore, coke and rebar futures have all hit limit up during today's trade, while crude might even get back to $40.

Nice to see. A few mining stocks are going ballistic.
Posted by Pete Wargent at 13:02