Vacancies rise in Perth and Darwin

SQM Research reported a vacancy rate of 2.3 per cent nationally, with the November data following an expected pattern for the time of year.

The Hobart and Sydney rental markets remain tight, which has seen asking rents in the Tasmanian capital rise.

At the other end of the scale Darwin (+3.8 per cent) and Perth (+3.9 per cent) continue to see vacancy rates rise, resulting in declining rents. 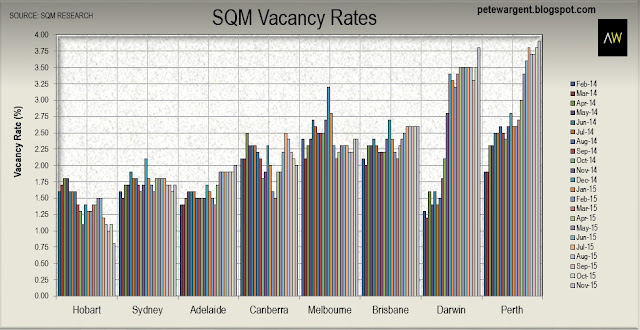 Melbourne has perhaps been the surprise package, with vacancy rates declining from 2.7 per cent to 2.4 per cent over the past year.

At the national level only modest rental increases are expected in 2016 given the stage of the construction cycle.
Posted by Pete Wargent at 06:12