"Don’t wait to buy land; buy land and wait” is one of the oldest adages in real estate, and one which has served Sydney homeowners well over the years.

When I released my book Get a Financial Grip in June 2012, I predicted that with years of under-building in Sydney and the cost of borrowing more likely to fall than not, it would likely continue to be a strong decade ahead for the harbour city, despite the already strong gains we had experienced since the financial crisis.

While it is impossible to “fine tune” markets with anything like that level of timing or precision, this has been a pretty good bet nonetheless, with Sydney median house values rising by a further $413,500 since that time.

Residex released its final market update for 2015 which, as widely expected, showed that Sydney’s housing market slowed a little in November, although the median house price was still up by $19,000 over the month, and some $40,500 over the quarter.

Thus the “narrative fallacy” struck once again in 2015, with Sydney house prices defying a thousand downbeat predictions to rise by another 20.5 per cent or $192,500 in the year to November, following on from gains of $129,000 the in the 2014 calendar year. 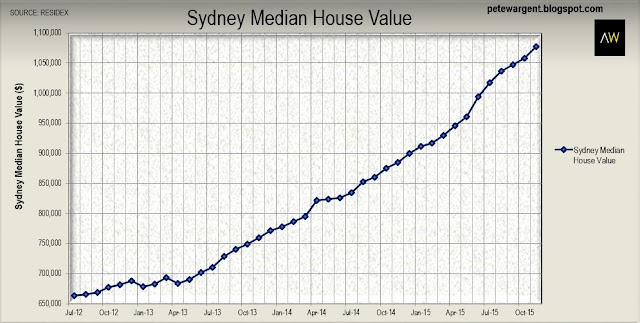 Median unit values in Sydney also rose by 15.3 per cent in the year to $688,000, with an increase of 3.4 per cent over the last quarter being stronger than the equivalent gain for houses.

It is evidently an urban myth that sales volumes must surge in order for property prices to do so, since volumes in Sydney have barely budged in 2015.

Although both median house and unit rents have continued to rise in Sydney, they surely have not been keeping pace with rampant price growth for some years now, and as such yields have been eroded and the boom is living on borrowed time, even in a low interest rate environment.

Investors seeking value for money, reasonable yields, and sustainable capital growth will find better bang for their buck in Brisbane in 2016.

Some of Australia’s greatest property booms historically, including those seen previously in Darwin and Perth, whether by cause or effect have been consistent or contemporaneous with periods of effective full employment, and unemployment rates sinking as low as 3 per cent.

At present none of Australia’s capital cities are remotely close to that level, but Sydney’s latest reading of 4.4 per cent is heading in the right direction and is indicative of a strong labour market, particularly in its inner suburban sub-regions where unemployment is very low.

Ace cards for Sydney for the remainder of the decade will be an unprecedented $70 billion infrastructure boom, as well as a projected surge in the number of international students. 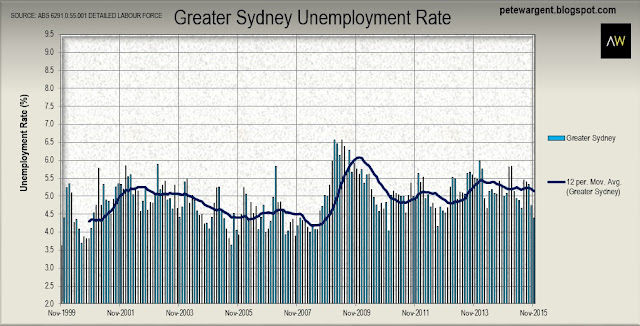 Melbourne has surprised commentators (by which, of course, I mean "surprised me"), with median house and unit prices rising by 13 per cent and 6 per cent respectively over the year to November.

Despite residential building and approvals continuing at a furious pace, vacancy rates in the Victorian capital have declined from 2.7 per cent to 2.4 per cent over the past year, although December is likely to record its usual seasonal spike.

Through this calendar year Greater Melbourne’s unemployment rate has trended down from 6.7 per cent to 6.2 per cent on a 12 month moving average (12mMA) basis.

At the macro level the Melbourne property market has the same potential ace up its sleeve, that being the projected boom in international students, which is expected to benefit the largest capital cities disproportionately. 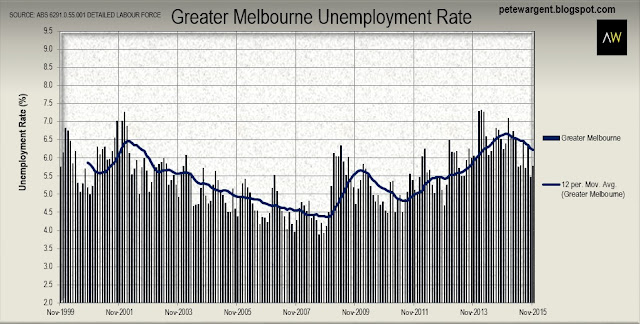 Brisbane has seen house prices and unit prices rise in the year to November 2015 by about 4 per cent and 3.5 per cent respectively.

Queensland has experienced its fair share of redundancies and retrenchments as the resources construction boom has faded, but the Brisbane unemployment rate has declined from 6.3 per cent to just 5.8 per cent over the year.

The city will benefit economically from a building boom in 2016, but some inner suburbs will accordingly play host to a glut of apartments, meaning that prospective property buyers will need to choose even more wisely than usual. 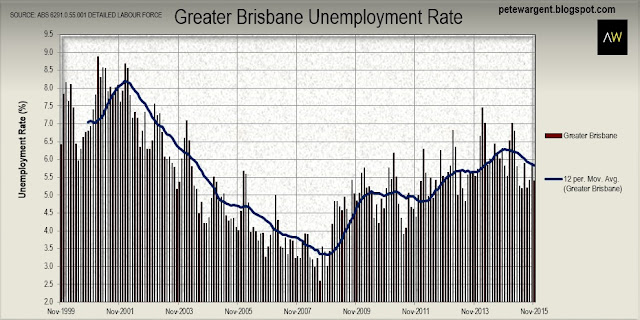 The Domain Group forecasts moderate gains for Perth house prices in 2016, following declines of about 3 per cent in the year to November 2015.

The Perth unemployment rate is still only 5.8 per cent on a 12mMA basis, but the trend has clearly been up since the most recent low in the first quarter of 2013, and vacancy rates are now elevated.

With population growth slowing in Western Australia, on balance it seems likely that house prices have a bit further to fall yet before bottoming out. 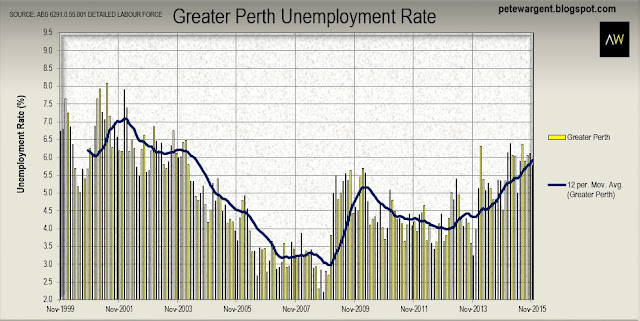 Adelaide has the highest unemployment rate of the capital cities, with the moving average rising from 6.7 per cent to 7.4 per cent in the year to November 2015.

The last two months of employment data have represented a tentative improvement, but the reality is that there are still some manufacturing closures to come.

House prices have recorded steady gains of about 4.5 per cent over the year to November, and there are doubtless some good buying opportunities at the micro level. Just be wary of the fundamentals. 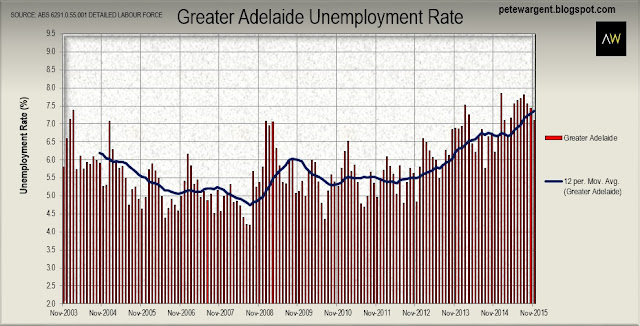 I noted back in 2014 that the Tasmanian economy should welcome a lower dollar and stands to benefit from record Chinese tourism spend, and in turn the unemployment rate in Hobart has continued to improve this year from 6.4 per cent to 6.2 per cent.

Vacancy rates are now exceptionally low in Hobart with rents rising strongly in what is the one bona fide capital city landlords’ market.

There is every chance that house prices could “pop” higher following tepid gains of around 2 per cent in the year to November.

Question marks do however remain about the long term potential for growth, with employment gains only slender and positive net overseas migration into Tasmania to the tune of just 8 (eight) persons recorded in the June quarter. 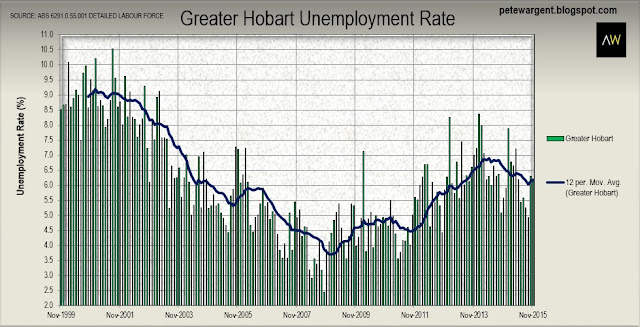 Median household incomes in Canberra remain the highest in the country, though one always has the nagging suspicion that we're only ever one fundamental change to land release policy from a potential correction in this most artificical of markets.

Finally, house prices were fairly flat in Darwin in 2015, but I expect to see declines in 2016 as sales volumes and rents fall in the face of oversupply.

The outlook for unemployment varies quite significantly across the capital cities.

In 2016 we might expect to see some off the plan transactions falling over as a result of tougher deposit requirements, and some areas are set to experience a slew of apartment completions. leading to a scramble for tenants.

The best buys for 2016 will include certain Brisbane locations, but away from the inner city oversupply.

Perth remains on the watch list, but at this juncture the market bottom looks to be a way off.

By the way, to find out more detail about some of these dynamics you can click on the embedded links to see where I have provided more detail and analysis.
Posted by Pete Wargent at 21:29