The latest Demographic Statistics to June showed that annual Australian population growth increased to +317,000, largely thanks to data collection issues related to births being fixed rather than there being an actual increase in population growth, as I have already noted here.


Net overseas migration over the past year remained very strong into New South Wales (+66,000) and Victoria (+54,000). However, the end of mining construction boom has seen overseas migration into the resources states slow sharply since 2012. 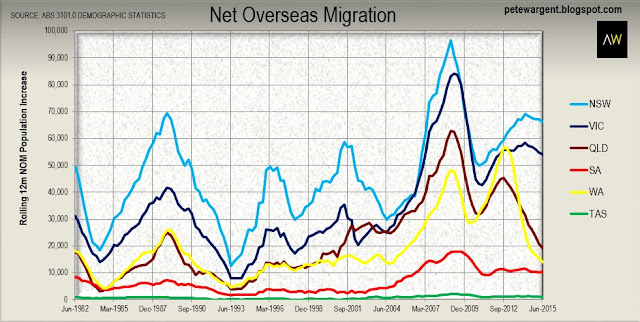 Net overseas migration elsewhere was never particularly strong anyway. In the June quarter a grand total of 8 (eight) people immigrated into Tasmania, for example, only a small increase in headcount.


If I'd previously been rather circumspect about the macro level prospects for Melbourne property, I'm steadily being forced to upgrade my viewpoint and accept that the dwelling supply is not racing ahead of demand quite as quickly as I expected.

Yes, there has clearly been some localised overbuilding of apartments, yet partly as a result of the multiplier effect of residential construction annual net interstate migration is now at record levels and rising at more than +10,000.

Similarly, Sydney - which once saw tens of thousands of folk per annum enticed interstate to cheaper and warmer climes, is now seeing more of these swing voters inclined stay put for brighter employment prospects.

South Australia's "brain drain" picked up the pace in the June quarter, with another 1,362 testy souls drifting off elsewhere in search of gainful employment, the highest quarterly exodus since the 2008 economic slowdown. 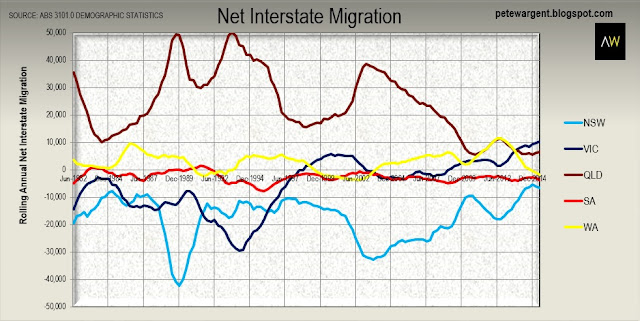 In general, Australians migrate interstate less often than was once the case. Apart from the eminence of Victoria as a destination, the only other state to benefit from a net inflow is the sunshine state of Queensland, where the annual net inflow has steadily rebounded to +6,417.


Totting it all up population growth remains mightily strong in New South Wales (+104,300) and Victoria (+99,400), with the four most populous states accounting for well over 93 per cent of Australian population growth.

Meanwhile the population growth rate in the Northern Territory has slowed from above +2 per cent to close to zero. The Darwin property market appears set for a significant correction with rents having fallen sharply. 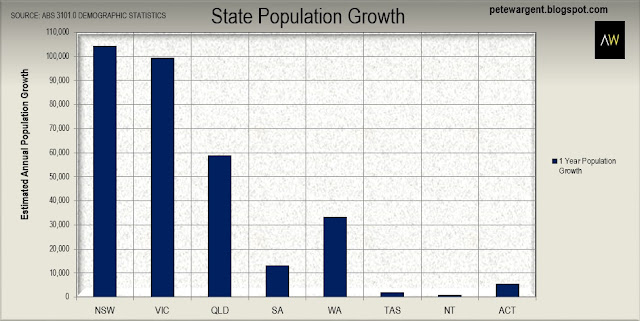 Plotting the long run rolling annual population growth figures shows the impact of the end of the construction phase of the mining boom on the resources states, suggesting that resources-influenced regions are set to feel some pain as thousands of generously paid contractors return to the capital cities. 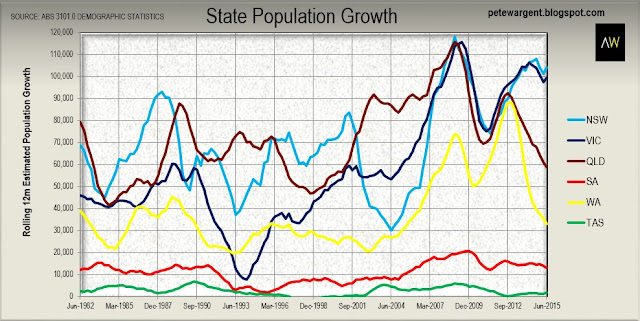 Sub-regional forecasts show that within the states an increasing share of population growth over the decade ahead will be accounted for by the capital cities at the expense of regional centres. 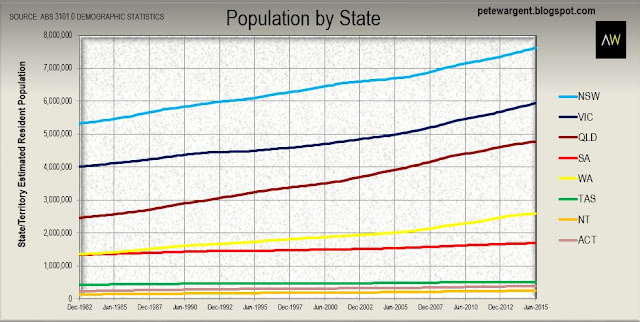 Population growth going forward will be driven by a projected surge in international students which will mainly impact the largest capital cities, while analysis by the ABS has also found that more than 80 per cent of those migrating overseas return to Australia within one year raising question marks over the relevance of the long term departures data.

The most timely available figures from the Department of Immigration and Border Protection (DIBP) show a significant uplift in estimates for net overseas migration for the year to December 2015 of +196,400.

In other words, according to the Australian Government net overseas migration is already rising again, and is forecast to simply keep on rising to +242,900 for the year to June 2019.

The key driver? Students.
Posted by Pete Wargent at 00:55