The October 2015 Overseas Arrivals & Departures figures showed rolling annual net permanent and long-term migration continuing to fade to 278,000, a 16 per cent decline from a year previously as Kiwis and Brits in particular vote with their feet, attracted by brighter employment prospects elsewhere. 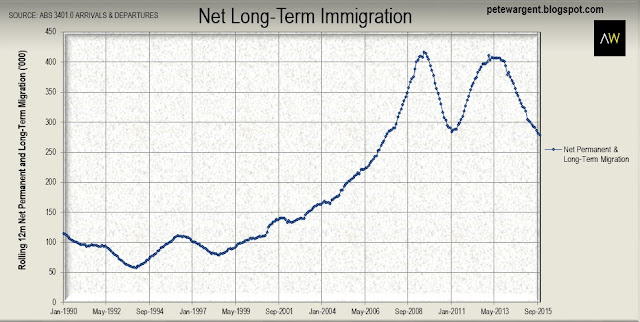 While the numbers of permanent arrivals from Europe and Oceania have fallen sharply since 2012, well over half of settlers hail from Asia, with migrants from that continent continuing to transform Australia's demographic make-up.

The latest demographic statistics estimated that Australia's annual population growth had slowed to a near decade low of 316,000, although it is worth noting that the last six months of available data have understated natural population increase in New South Wales and Victoria due to a lag in data processing.

Meanwhile the most up-to-date labour force figures showed employment growth in rude health at 2.7 per cent seasonally adjusted (or 2.3 per cent trend), miles ahead of the rate of population growth - which now sits at around 1.4 per cent - suggesting that if this dynamic can be sustained the unemployment rate may have peaked for this cycle.

Although the permanent and long-term immigration figures point to slower total population growth, these tell only a part of the story, with a boom in international students forecast to drive a rebound in time.

One of the economic benefits of a lower dollar is conveyed by the chart below, with annual short term arrivals surging by 7 per cent over the past year to a record 7.3 million, while short term departures appear set to arc lower as steadily more Australians opt to holiday at home. 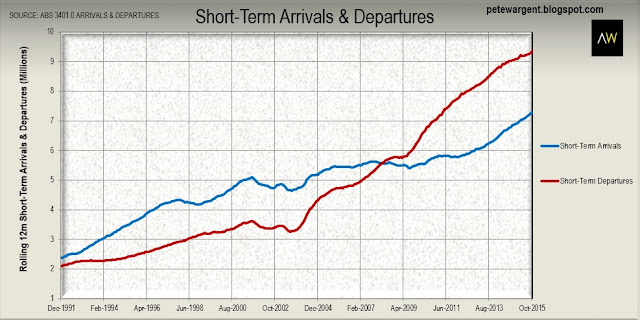 October 2015 was a landmark month with a seasonally adjusted 116,200 visitors from mainland China and Hong Kong surpassing the 108,000 neighbouring New Zealanders for the first time, in turn sending total annual Chinese visitors soaring 18 per cent higher to more than 1.2 million. 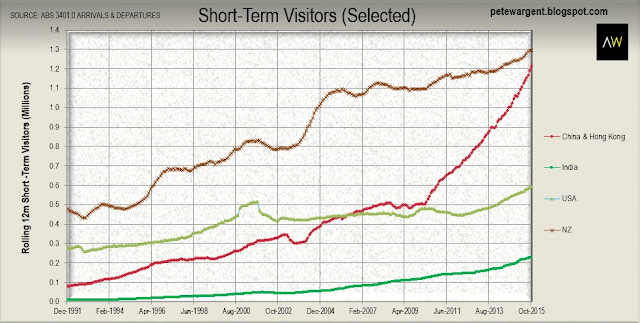 
I've previously looked in some detail on this blog at trends in international student visas, since a good deal of the fluctuation in population growth rates over the past decade have effectively mirrored and been driven by the peaks and troughs of net arrivals on student visas.


For example, the enormous spike in annual population growth to 453,100 in 2009 roughly coincided with record high net immigration of international students of 120,000 - but thereafter the student visa boom was cooled off, in part due to government concerns that the system was being rorted, and in part due to the floundering labour market.

By 2012 net annual international student immigration had cooled to just a quarter of the rate seen at its peak, and correspondingly nationally annual population growth slumped by fully 50 per cent to around 302,000.


The Department of Immigration and Border Protection (DIBP) had forecast that net immigration from those on student visas would explode to recapture record highs as soon as June 2017, yet later projections have been revised down after it was found that the numbers of students subsequently taking up permanent residency were lower than had been projected.

It is important to recognise, however, that while it might take a little longer to get to the expected lofty heights, the appetite to push higher education as an export sector has not gone away, with the latest quarterly forecasts expecting the sector to be a key driver of immigration over the decade ahead. 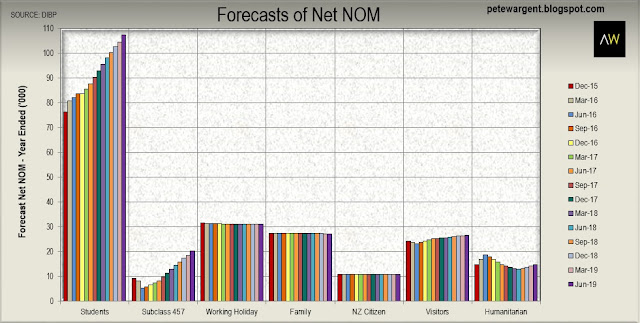 Following a review and subsequent streamlining of the visa process, the current pace of growth in applications lodged implies that 2016 will see another surge in international student numbers.

A large and increasing number of students go on to apply for second visas and find a path to Australian residency. The visa types that students move on to include post study work visas, 457 visas, working holiday visas, permanent points-test and other substantive visas.

Migration experts see this opening up of the higher education field as one of the most productive and effective shifts in economic policy in recent times.
Where to now?

With the relaxation of visa rules in the higher education system and a strong push from Universities for greater access to post study work visas, the above DIBP forecasts expect that eventually there will come a huge surge in net immigration related to student visas.

In terms of what this might mean for the actual immigration of students measured from December 2014 forth: we could potentially see net immigration of an extra half a million international students before the decade is out. Lower than previously projected, but still huge. 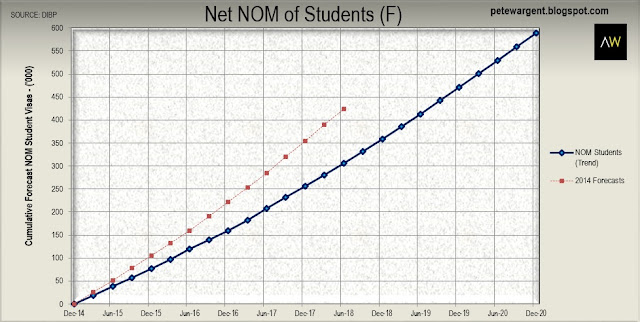 Of course, such forecasts do not always come to pass, but if the October arrivals and departures data serves as any kind of useful indicator, the figures confirmed that total annual short term arrivals for education purposes surged by 17 per cent to a record 455,000. 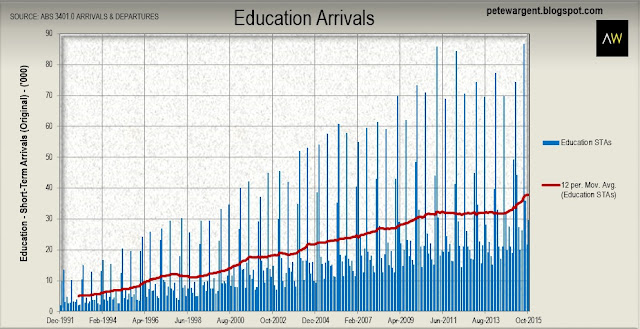 Reserve Bank research showed that unsurprisingly "student migrants will be likely to demand housing that is close to universities, city centres and other amenities rather than on the fringe of cities".

Most will rent, at least initially, so the forecast arrivals of hundreds of thousands of student migrants raise interesting question marks about the widely predicted supply overhang of apartments.

It is also noteworthy that Sydney and Melbourne are expected to receive a disproportionate share of net student arrivals with the two most populous states set to absorb more than two-thirds of the total student immigrants (and projected contributions to total annual population growth of around half a percentage point), and Queensland accounting for much of the remainder.

Even with the revised student figures the latest quarterly forecasts from the DIBP projects net immigration to increase steadily again from 2016, while if the student visa floodgates open as previously forecast then there is upside potential for population growth.

The projected inflow of international students comes at a time when APRA has poured cold water on the investor sector of the property market.
Posted by Pete Wargent at 19:34