'Til household debt do us part

The latest AMP.NATSEM Household Debt report showed that the average household debt in Australia has increased to a new high of $245,000, continuing a prolonged run-up which has seen the average debt per household increase by a factor four since 1988, up from $60,000.

While the bulk of the rise in mortgage debt has been driven by 30 to 50 year olds, the over 65s cohort also accounts for a fair proportion of the increase in household debt, with more Australians than ever before taking liabilities into retirement.

Despite this, the latest Australian National Accounts implied that interest serviceability has continued to become easier.

There are a thousand possible ways to measure this, nine of which is satisfactory: the blue points on the chart below denote interest paid on dwellings as a percentage of total employee compensation minus income tax, while the red points show total interest paid inclusive of consumer debt (excluding unincorporated enterprises) as a percentage of gross household income. 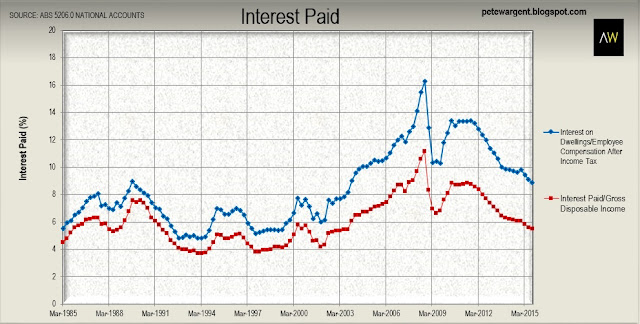 You could spend forever debating what should or should not be included in household income (imputed interest on dwellings, benefits receivable etc.) or backed out of gross household income (e.g. other taxes, transfers, insurance premiums etc.) but the results tend to be broadly similar.

Of course the results generally appear to be "too low" due to the significant number of debt free households. The important thing to note is the trend, which shows that while the mining boom was in full swing the aggregate mortgage interest repayment burden was tending towards excruciating levels by September 2008 (when the official cash rate was still as high as 7 per cent). but since that time serviceability has become relatively speaking very easy.

The Reserve Bank of Australia (RBA) has noted in its Financial Stability Review that indicators of household financial stress are presently low, with households pushing ahead on repayments to the extent that aggregate mortgage buffers - as measured by balances in offset and redraw facilities - remain at around 16 per cent of outstanding loan balances, or the equivalent of well over two years of scheduled repayments at current interest rates.

A crude comparison the aggregate interest paid to the total stock of outstanding housing credit implies that the average mortgage rate is well under 5 per cent, suggesting in turn that Australians have taken advantage of the very generous fixed rates available through 2015.

The AMP.NATSEM report found that the highest typical debt repayment burdens are to be found in the outer suburbs of our capital cities.

An increase in interest rates of 2.5 percentage points would also see repayments for the typical first homebuyer rising from 21 per cent to 30 per cent of household income, or a shade over an extra $8,000 per year.

There are few indications that the official cash rate is set to move materially higher any time soon, although shifts in capital requirements and funding costs may be another matter.

Unemployment rates have generally been trending down since January 2015, although unemployment rates in Western Australia and the Australian Capital Territory are in an uptrend, and the housing market in Darwin looks exceptionally fragile. 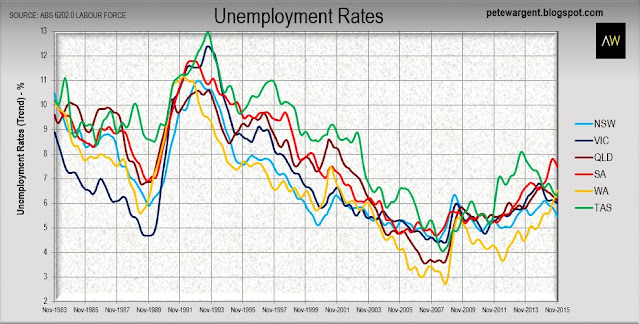 Although household financial stress is currently low, it seems likely that there will be some vulnerable housing markets in 2016, which may include;

-resources regions and markets, with the terms of trade crunch likely to result in multiple mass lay-offs to add to the winding down of capital investment;

-suburbs and sub-regions which are experiencing extensive over-building of apartments. particularly inner city high-rise stock, and those areas with already elevated and rising vacancy rates;

-off-the-plan developments which will be adversely impacted by APRA's tougher deposit measures; and

-outer suburban fringe locations in Sydney which saw a massive spike in investor activity and rapid price growth in 2015.

I'd include a generic entry here for "mining towns", but many have been so utterly smashed already, leading to investor defaults and bankruptcies, since not only were prices unsustainable, so too were rents, and even tenancies.

This month's Labour Force data showed that New South Wales economy has generated a seasonally adjusted +176,000 jobs over the past year, for an outrageous employment growth rate of +4.9 per cent (trend +160,000 jobs, or +4.4 per cent). The Detailed Labour Force figures, which provide more colour by city, region and industry will be released on Thursday. So stay tuned for that and more this week.
Posted by Pete Wargent at 05:22