Population grows at 1.4 per cent

Although this will no doubt be reported as a "rebound", the reality is that the past six months of figures that were obviously under-cooked as I noted here some months ago, with births in New South Wales and Victoria materially understated due to changes in data collection systems and a backlog in processing the figures.

Lo and behold, births in the June quarter were reported as being more than 22 per cent higher than in the three months to December, while there may still be come "catch up" to come in the next quarter of figures too. 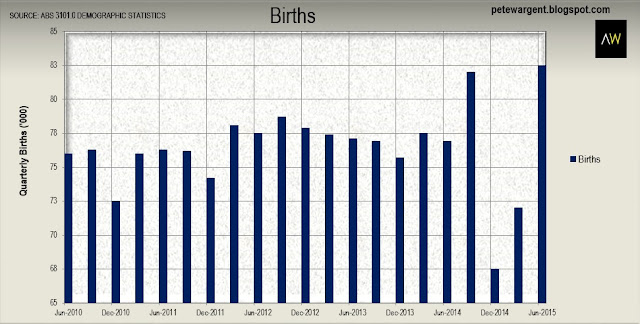 The rolling annual births versus deaths data over the long run shows that, despite a recent mini-surge in births, natural increase in the Australian population will not be the main contributor to population growth going forward as the number of deaths continues to creep steadily higher. 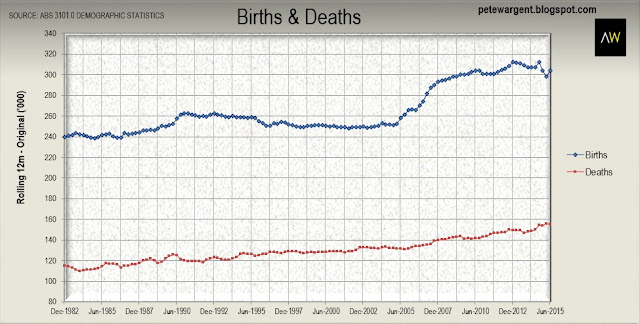 Setting aside the glitch in the births data, a more sober assessment of the figures shows that net overseas migration, which is the real driver of shifts in population growth, at the end of March was still tracking at about 15 per cent lower than one year ago.

The latest government forecasts predict that net overseas migration is now rising again, and will continue to do so the remainder of the decade, driven largely by increased student visa grants. 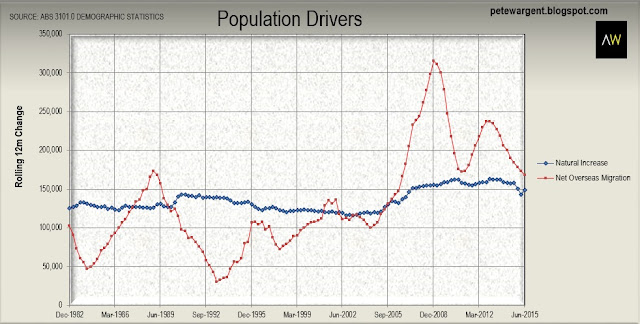 At the national level, therefore, population growth is tracking at just under +80,000 persons per quarter, or +1.4 per cent per annum, even if it seems likely that the headline figure slowed a bit further from here in the September quarter.

In rolling annual terms population growth is tracking at +317,000, which is well below the December 2008 peak of +460,000, a spike that was partly driven by a surge in international students. 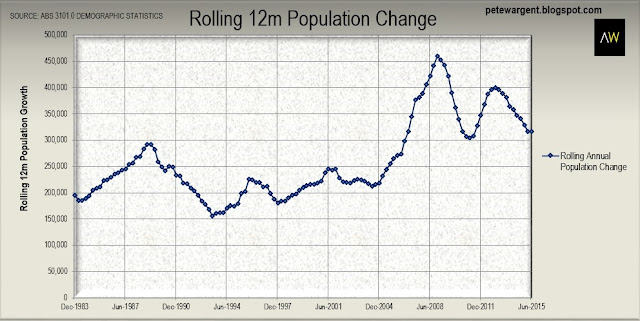 Overall the data implies that the Australian population will pass 24 million in the first quarter of 2016.

The figures suggest that the larger cities, particularly Sydney and Melbourne, will continue to experience very strong population growth, but in aggregate population growth across regional Australia and in the smaller capital cities is slowing quite sharply.

Next up, I'll look at the state level figures and trends.
Posted by Pete Wargent at 00:01