Bosh! The Office for National Statistics dumped its October data and Brit employment has surged by another +207,000 on the previous quarter, to be up by well over half a million jobs on one year ago.

Total employment has bolted to its highest figure on record at 31.3 million, while the United Kingdom employment rate of 73.9 per cent is now at the highest level since records began in 1971.

The unemployment rate has sunk to a near decade low of 5.2 per cent, approaching what is thought by some to be the "natural rate" of 5 per cent. 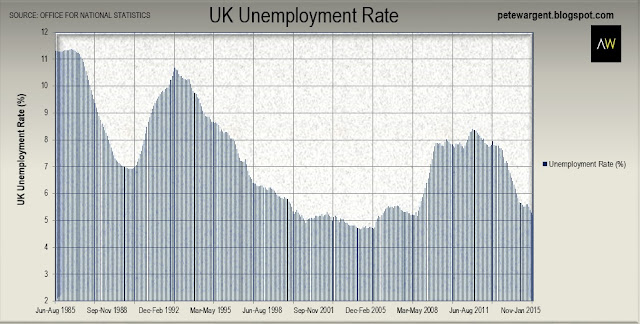 Average weekly earnings were up by +2.0 per cent, while total pay including bonuses was up by +2.4 per cent, below expectations but well ahead of the rate of inflation at +0.1 per cent.

The October house price data showed that the average mix-adjusted house price in England has hit £300,000 for the first time on record, having increased by +7.4 per cent over the year.

Note in the chart below that prices in Northern Ireland are also now up by +10.3 per cent over the past 12 months. though the Northern Ireland index remains a punishing 41.1 per cent below its August 2007 peak.

The average London house price is now £531,000 with the index for the capital up by +7.7 per cent over the year, while even stronger annual price growth has now rippled out from the capital to the East (+10.4 per cent) and the South East (+9.5 per cent) of England. 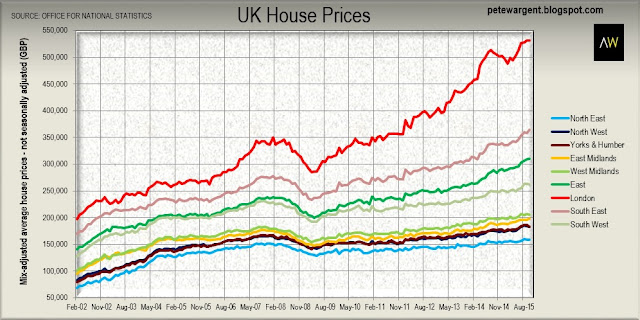 Mortgage lending jumped by +8 per cent in October, while Buy to Let lending has burned +36 per cent higher year-on-year as landlords scramble to buy before punitive changes to stamp duty rules which kick in from April 2016.

Bank of England Governor Carney has promised to take further action to cool the Buy to Let sector.

The Bank of England will doubtless be paying close attention to the US Federal Reserve's moves this week, with the first UK interest rates hike still generally considered to be some way off.

The long run house price data provides a valuable lesson in the merits of buy and hold, while also showing the massive outperformance of England's capital city.

Even house prices in Northern Ireland (+58 per cent) are positive over the same timeframe, although buying at the peak would have been a gut-wrenching experiences, with house prices on the ONS data series approximately halving thereafter.
Posted by Pete Wargent at 00:09