A lot of time and energy is devoted to predicting this unpredictable data series, which showed another seasonally adjusted 3.9 per cent rebound in October in recording 19,652 approvals.

According to the ABS trend data, at least, building approvals have been trending down since peaking in March this year. 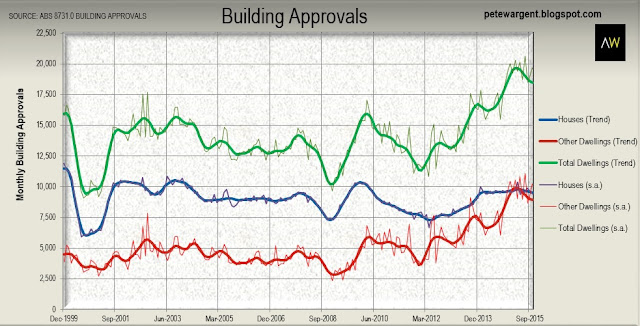 Well, that's one way of looking at the figures, however, this really does depend on how you apply trend weights for each month!

For example, if I just run the original data (not seasonally adjusted) on a 12mMA basis, while house approvals have evidently passed their peak, other dwelling approvals are clearly still inching up.

In fact, the original data showed a thumping 21,720 approvals in October, so it's a bit odd to be talking about a peak after a number like that, whatever the seasonal adjustments may say! 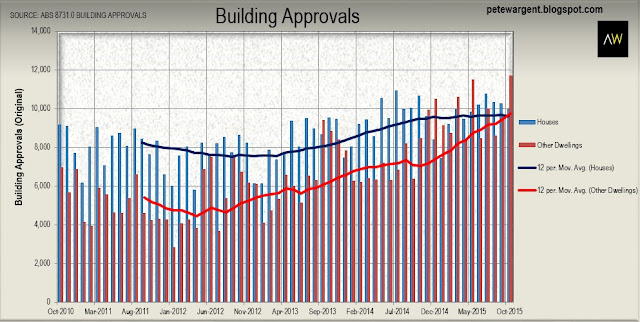 In any case, the big picture is that rolling annual building approvals are tracking at their highest ever level, with an all-time high 233,180 approvals over the past year, a massive increase of 17.3 per cent.

As the capital cities become denser, for the first time ever in Australia over the past year there have been fewer houses (116,000) than other dwellings approved (117,000), which merely underscores how unpredictable these figures can be.

This is partly reflective of how new Asian migrants like to live, as well as a growing tendency towards capital city living, but is at least equally reflective of developers finding a ready market of foreign investors to buy high rise stock.


At the capital city level, house approvals are still trending up gently in Melbourne and Sydney, but have generally passed their peaks across most capital cities. 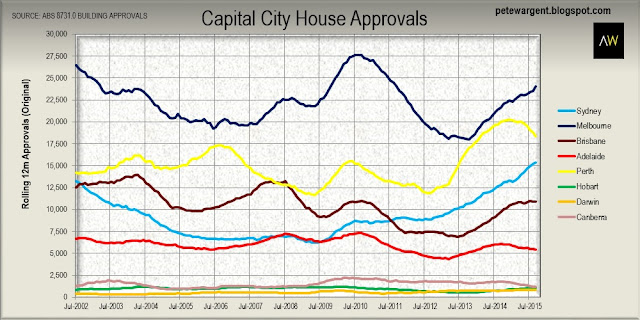 On the other hand, multi-year property booms in Sydney and to a lesser extent Melbourne have led to a resurgence in approvals of other dwellings, while other dwelling approvals in Brisbane are also tracking at record highs. 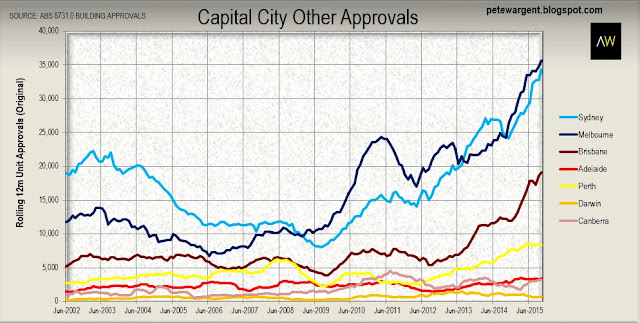 This month's strong result was driven by high volumes of other dwelling approvals in Greater Melbourne (3,640), Greater Sydney (3.630) and Greater Brisbane (1,671).


These figures suggest that the residential construction industry will operating at or close to its full capacity for quite some time to come, which in turn will keep material upwards price pressure on tradies and materials costs.

Remember, though, that these are approvals figures, and there is of course no guarantee that all building approvals will make it through to become dwelling starts and then in turn dwelling completions.


Through necessity this blog page focusses on macro level issues, but for the really interesting stuff you need to drill down to the suburb level and look at what dwelling types are actually being constructed and where.

At the risk of stating the obvious, this approvals cycle has been overwhelmingly driven by the high rise sector, with approvals for dwellings of four or more storeys continuing to pump out unprecedented numbers.

On the other hand, in many capital city locations we aren't building enough houses, townhouses, and other low rise attached dwellings.

Come and see one of my live speaking presentations for more detail on this. 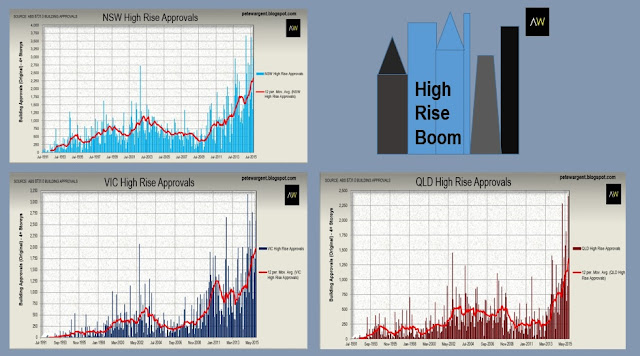