Credit growth at near 7 year high

Near 7 year high for credit growth

The mining and commodities malaise has rightly dominated recent news, with commodity prices continuing to sink, and the share prices of the major resources companies following suit in tanking to multi-year lows.

Despite the commodities woes the outlook for non-mining industries has been very gradually improving, albeit from a low base.

The latest Financial Aggregates data from the Reserve Bank released on Monday showed credit growth expanding further to an 83 month high of 6.7 per cent. 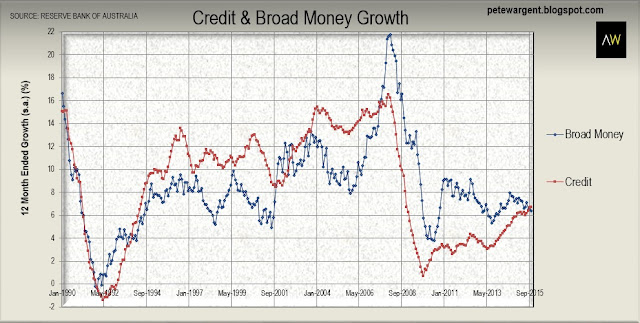 Let’s take a look at the details in three short parts.

Business credit recorded a second consecutive strong month with 1 per cent growth following on from a 1.1 per cent expansion in the preceding month, taking annual business credit growth to an 80 month high of 6.6 per cent.

Credit growth in the housing market has performed a full “switcheroo”.

The rate of investor credit growth has declined sharply to well below the regulator’s arbitrary 10 per cent advisory speed limit at 9.3 per cent, but annual owner-occupier housing credit growth is now expanding at an annual pace of 6.1 per cent to pick up the slack.

In fact, the abrupt U-turn in lending trends all seems rather too convenient as I’ll consider further below. 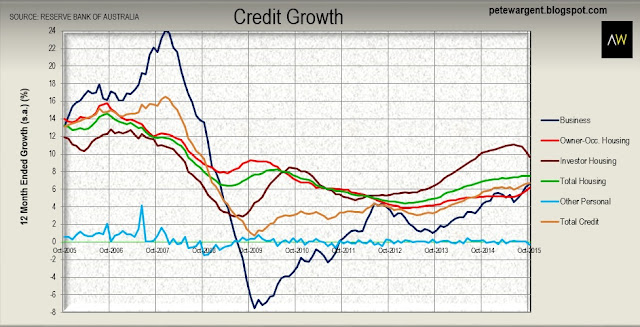 The growth in currency and current deposits (“M1” money) which had turned negative in 2012 has expanded by more than 13 per cent over the 12 months to October 2015, allaying concerns that a dearth of deposit growth would act as an effective handbrake on lending for housing. Annual growth in "M3" money was 6.3 per cent. 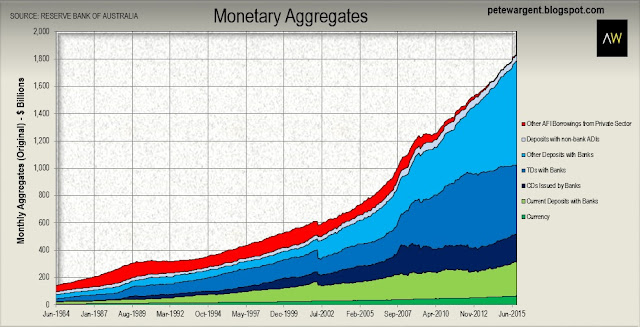 The recent capital expenditure survey confirmed the inevitable, that being that mining investment is set to follow the trajectory of commodity prices in collapsing dramatically over the year ahead.

The outlook for other industries, on the other hand, has steadily been clawing its way back from the doldrums.

Continuing an ongoing rebound from the recession-like trading conditions experienced between 2009 and 2011, annual business credit growth of 6.6 per cent represents the strongest result since February 2009.

If the graphs charting credit aggregates for owner-occupier and investor housing are taking on an increasingly jagged appearance, this is in part representative of revisions related to the lack of clarity surrounding loan classifications.

This does not come as too much surprise to those working in the industry, with the lines between owner-occupier and investment having become ever more blurred, but the point nevertheless raises further concerns over lending standards.

APRA’s cooling macroprudential measures have apparently knocked back the investor market with credit growth slowing to 0.4 per cent in October which is the slowest rate in 2.5 years.

This may beg the question who, if not foreign buyers, will purchase the significant pipeline of new apartments which are set to hit the capital city markets over the next couple of years.

Tougher deposit requirements are a major threat to the off-the-plan sector too.

On the other hand, the much larger owner-occupier sector recorded another leap of 0.7 per cent to offset the decline in investor lending.

Owner-occupier lending increased at an annual pace of 6.1 per cent, the strongest result for this sector since July 2011.

It all seems rather suspect to me that lending has magically shifted from the investor sector to owner-occupier lending since June (if you didn’t know better, you’d assume this was a systemic rort, and given the scale of recent revisions, this might at the very least warrant further scrutiny from the regulator).

In any case, the net result was that annual housing credit growth continued to expand at a rollicking pace of 7.5 per cent, which is a high rate of growth given the starting point and the strongest result since October 2010. 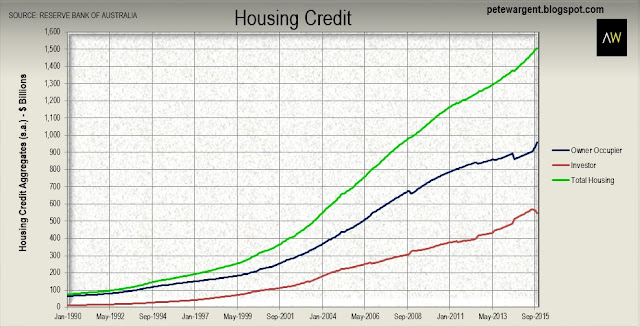 Piecing it all together, this was another solid result for business credit growth which expanded by $6.8 billion to $822.7 billion.

Meanwhile the housing market story for the year ahead is set to become a battle of what extent lenders can push the much larger owner-occupier sector forward.

Although the present housing cycle since 2012 has largely been driven by a frenzy of investor credit, the owner-occupier sector is by far the most important in determining the outlook, due to its relative size.

Indeed, following revisions the investor share of outstanding housing credit has declined from a recent peak of 38.6 per cent in July to below 36.4 per cent in October.

Anecdotally I have heard from more than one source that lenders have been inundated with mortgage applications in recent weeks, leading to backlogs in processing times several times their “norm” (and these latest figures from the RBA add some weight to the rumour mill scuttlebutt).

The unanswered question to my mind, however, remains to what extent this apparent rush is accounted for by refinancing in response to tightened mortgage rates, and how much of the spike relates to genuinely new demand for mortgages.

To date at any rate, lenders seem to be winning the battle, sending the stock of outstanding housing credit to beyond a landmark $1.5 trillion in October, the housing credit aggregate having doubled since March 2006. 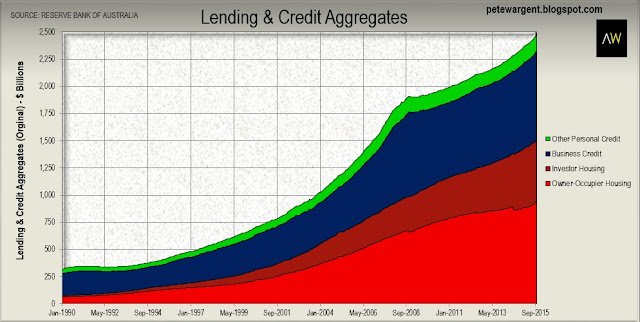 It is worth noting in passing that housing credit is continuing to expand at an annualised pace of 7.5 per cent, implying that the stock of credit would double again to more than $3 trillion within a decade.

In the words of Frank Sinatra, “something’s gotta give”…
Posted by Pete Wargent at 07:45