Earlier in the year I wrote a short piece on this blog (faithfully reported in The Australian here) noting how in 2014 there had been a relative dearth of people in my age bracket, that being the 31 to 38 year old cohort (refer to Point A on the below chart). 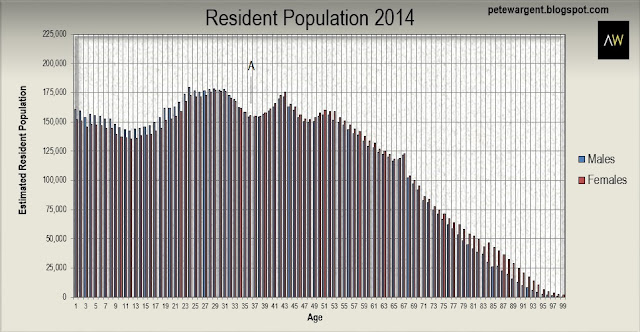 With the latest demographic statistics being reported last week, I thought it would be germane to revisit Australia's demographic pyramid, particularly in the context of what it means for the housing market going forward.

Most property market commentary and analysis focusses purely on headcount, and there's no question that even if we look solely at the 25 to 55 year old age range, the market of potential homebuyers is swelling impressively over time from fewer than 5 million persons in 1971 to more than 10 million today. 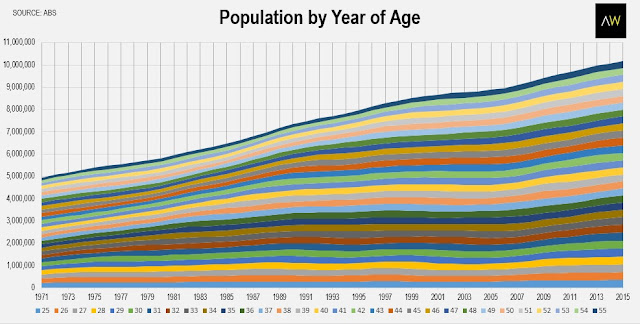 Over the present market cycle, however, the actual number of owner-occupiers buying homes has not recaptured the levels seen in previous cycles, despite a recent spurt in New South Wales. 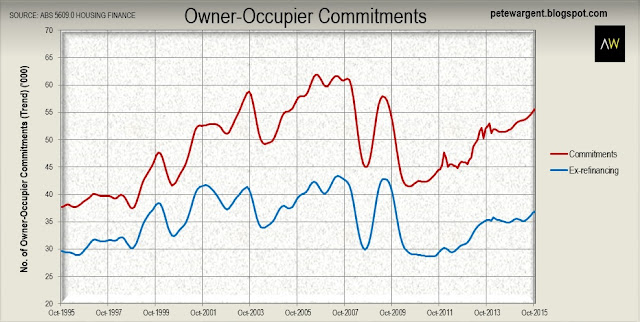 There have been a number of reasons for this, including the deposit hurdle, affordability constraints in some capital city locations, lifestyle choices, and a huge surge in the number of investors, with a more transient workforce and legislation which also allows generously for deductions against taxable income.

At least a part of the dynamic has related to demographics. Demographics are always vital, because by and large people tend to do reasonably predictable things at predictable times in their life.

While there will always be a certain percentage of first time buyers who are gifted or inherit deposits, most buyers who save a deposit will on average be buying their first homes later than previous generations did.

With skilled migration having centred on the under 30s cohort, lately there has not been a critical mass of headcount in the 31 to 38 year old age bracket, which in an age where we do most things later than we used to is likely to capture most first homebuyers, at least in the capital cities.

Dicing up the most timely available data into a population pyramid by year of age reveals that following a lull over the last decade there is a wave of twenty somethings and early thirty somethings eventually set to flood the first homebuyer sweet spot over the years ahead. 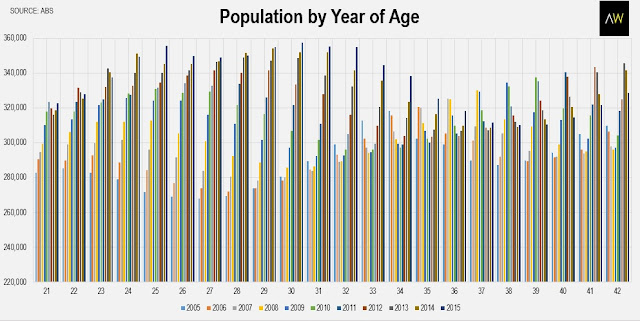 Looked at another way below, we can see that the total headcount of the 31 to 38 year old cohort actually declined in both the 2010 and 2011 financial years respectively, to sit just shy of 2.5 million (refer to point B on the chart below).

Beginning in financial year 2016, however, as denoted by Point C on the below chart, the figures are steadily expected to ramp up, and upon running some nifty projections it can be seen that the total will move close to 3.1 million by the end of the decade (Point D). 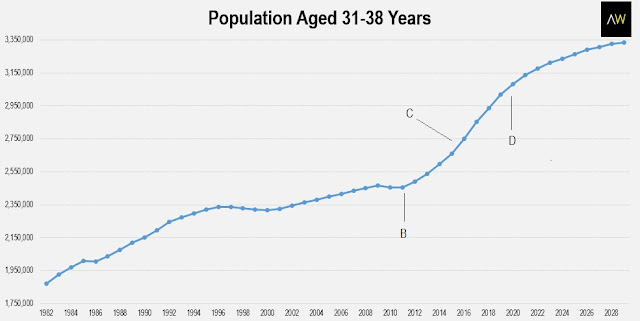 
There has been a good deal of hand-wringing about first homebuyers having gone "on strike" through the present market cycle, although it was fairly obvious to those working in the industry that first time buyers were often simply purchasing as investors instead.

Following an investigation into the matter the ABS eventually acknowledged in early 2015 that the number of first time buyers was being under-reported, although in truth the issue was well known about and freely discussed in the more enlightened property forums as far back as 2013.

While the debate was previously largely dominated by pettiness and point-scoring, with APRA's macroprudential measures effectively knocking the investor market for six this issue is about to become "mission critical" for housing markets.

The fate of markets in 2016 and beyond will be determined by the appetite for owner-occupier lending and purchases, and in aggregate volumes cannot easily increase unless bona fide first homebuyers return to the market.

To date the decline investor activity has largely been offset by a corresponding increase in owner-occupier lending, although it seems likely that some of this was accounted for by refinancing in the face of tightened mortgage rates (as opposed to genuinely new owner-occupier demand).

The demographics show that there is a wave of millions potential first home buyers set to sweep the market over the years ahead.

The $6 trillion unanswered question is: can lenders and policy makers persuade first timers to buy, or facilitate a smooth handover to owner-occupiers? Only time will tell.
Posted by Pete Wargent at 08:45