The answer to yesterday's "where" was Charing Cross, London, which many Londoners believe to be the central point of the city (and, for some, the Universe), where the Strand meets Whitehall, close to Trafalgar Square.

For that reason, it is generally used as the starting point for measuring distances from London.

The original cross was destroyed in 1647 and was later replaced by a Victoria replica following the construction of the train station in 1865.

There has been some consternation in London this week as the Bank of England glumly noted the subdued inflation outlook and conceded that interest rates may not rise in the second half of 2016, or perhaps even later.

In related news, yesterday Halifax released it latest House Price Index which showed house price inflation accelerating to 9.7 per cent (against a backdrop of a consumer price inflation rate of zero). 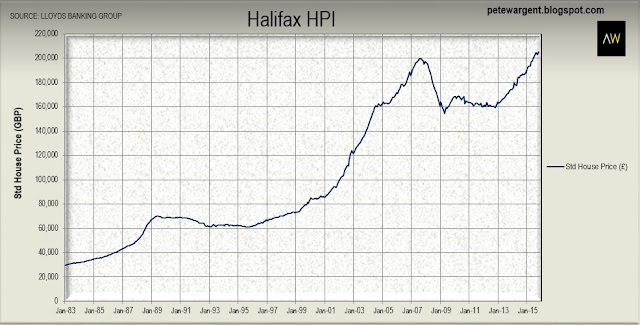 The quarterly data has shown just how skewed price growth has been to London and the south east.

Indexing of the full data series to 100 as at March 1983 shows that while price growth has occurred everywhere over the past three decades, the gap between London and the rest has become a gulf, and in fact has exploded off the chart to well above 1000 in continuing to rise at a crazy annual pace of well above 13 per cent. 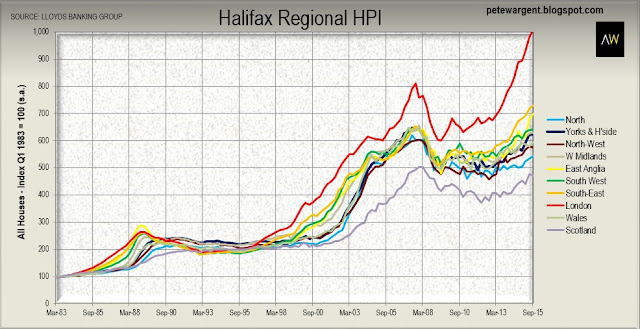 This mirrors the findings of the Land Registry data last month which showed that the average London price has soared to an outlandish £500,000.


It's becoming increasingly clear that the UK housing market is not functioning in its present form, with stock levels now plummeting to their lowest level on record.

There are so many reforms which need to be considered - stamp duty and the selling process being just two of them.
Posted by Pete Wargent at 18:48