Total new capital expenditure was crunched in the third quarter, declining by a seasonally adjusted 9.2 per cent to $31.4 billion to be 20 per cent lower over the year and well below the Q2 2012 peak of $42.6 billion.

Quarterly mining capital expenditure predictably bore the brunt of the fallout, declining to $15 billion, also way below its 2012 peak of $24 billion, although the end of the resources construction boom hits some associated industries too (e.g. transport). 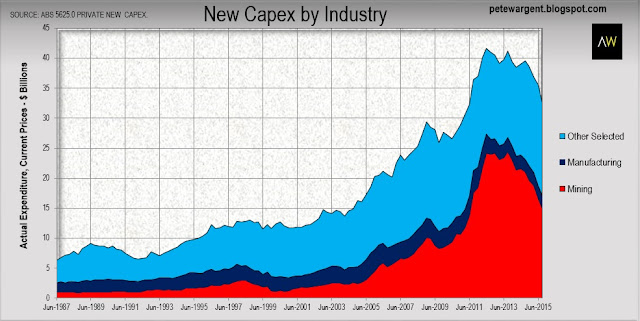 Curiously enough on a rolling annual basis total new capital expenditure has increased in New South Wales (+6 per cent) and Victoria (+7 per cent).

However, total annual capital expenditure in Queensland has halved since 2012 as major resources construction projects wind down, while activity in Western Australia is now following a similar trajectory.

Activity in the Northern Territory is being held aloft at historically high levels by the Ichthys LNG project.

Is there anything positive at all to glean from these miserable looking numbers? Possibly.

The first chart above suggests that the decline in capital expenditure could now be more than half way through its nosedive (if you can call that a positive), assuming that activity broadly declines to where it was before the beginning of the mining boom.

Secondly, there was a decent lift in the expected capital expenditure figures for other selected industries to $56 billion which meant that the "Estimate 4" total expected capex figure increased by 4 per cent to $120.4 billion.

The Estimate 4 figure was towards the more positive end of the range anticipated by the market.

The limited scope of this survey does overstate the impact of mining  - and understate the importance of other industries - and there is some sign of confidence and investment plans improving even if this still represents a 21 per cent decline from the equivalent estimate in the prior year.

Given that this is a survey relating to the third quarter, there is also some potential for a "Turnbull bounce" in confidence to improve expected investment in the next quarter's survey.

There is not much positive to say about the outlook for mining investment, though, with the Estimate 4 figure crashing by more than 34 per cent over the past year.

So while the Australian economy may not be technically in recession, it will no doubt already be feeling like one in many resources regions, with further declines to come unfortunately.
Posted by Pete Wargent at 18:04