I'm in the midst of what will ultimately be my most comprehensive research project to date, and henceforth will aim to share a few high level viewpoints and findings on this blog page along the way.

There are of course a multitide of factors which impact and drive housing markets ranging from macroeconomic drivers to monetary policy, and from consumption patterns to construction rates.

But for today let's look briefly and specifically at Australia's demographics.

Looking below at an Australian population pyramid - which for the purposes of this blog post I have flipped on its side - representing the estimated resident population as at 2014, we can immediately observe a couple of salient points.

Firstly, although Australia does have an ageing population, in part thanks to our immigration program the demographic profile of Australia is markedly different to those found in some other developed countries, and considerably less "top heavy".

With skilled migration in particular often having favoured those in the 21-30 age bracket, there is presently a relative dearth of people in my age bracket, that being the 31 to 38 year old cohort (see Point A on the below chart).

Depending upon your preferred information source the average or "typical" age of first homebuyers in Australia now ranges anywhere from 31 to 34 years of age, and that figure could potentially levitate further due to a combination of lifestyle factors and increasingly stretched deposit gaps in the two major capital cities.

Of course, an "average" covers a wide range of ages and strains of buyer, but recent data has suggested that a comfortable majority of first homebuyers are now in their 30s or 40s.

Investors in the ascendancy...for now

The shape of the first chart above may therefore go some of the way to explaining the comparatively low volumes of homebuyers in the market through this cycle, with investors dominant to an an unprecedented degree, particularly in the largest capital city markets.

Naturally other factors have played a role here, particularly looser monetary policy which has encouraged those with existing equity generated through housing market ownership to redeploy it in a faithful manner.

Not only is there a relative paucity of 31 to 38 year olds where we might expect to find the bulk of first homebuyers, there is also an evident weak spot in the traditional "big spender" cohort.

Which is to say, there is a proportionate lull in the number of executives, senior managers and business owners commonly aged from around 45 to 55 (refer to Point B on the above chart).


While the wave of first homebuyers predominantly impacts dwelling prices at the entry level, it is those in these middle working years that are the heaviest spenders in the housing market, making their most material dwelling purchases at that stage in life.

As you can see in the graphic above, the demographic pyramid does not present too kindly in respect of either cohort at the current time...and nor is it likely to do so for some years.

In fact, rolling the chart packs forward by calendar year we find that it is not until around around 2021 that the number of potential first homebuyers reaches a critical mass which might be considered compelling, with the number of 31 to 38 year olds in particular mushrooming to a total of more than 3.1 million (from around only 2.6 million in 2014).

In the period through to 2027, that number is projected to have expanded further still to more than 3.3 million.

As this effective "spending wave" passes through 2021, therefore, the demographic factors for Australian housing market growth look to be particularly favourable from that year until around 2027 inclusive.

As you can see in the second chart below, not only will the total population of Australia have swelled significantly by 2021 to around 26.5 million, the clamour of potential purchasers in the 31 to 38 year old age bracket (Point A below) really begins to amplify.

Furthermore there will be a coinciding wave of Australians approaching the latter half of their fourth decade (Point B below), the time of life at which they are likely to make their most consequential home purchases.

This isn't to suggest here that the demographics for homebuyer activity then deteriorate after 2027 as such, rather that the projected figures then plateau for a period of time and thereby stop improving so impressively.

Drilling down to the next statistical level, it can be found that from around 2021 the demographic waves will become very favourable for Sydney, Melbourne, Brisbane and and particularly Perth (assuming the superfluity of mining boom migrants opts to stay put, and interstate migration away from Western Australia doesn't begin to bite).

Hampered by an interstate migration "brain drain" these demographic waves do not suggest a favourable environment for the Adelaide housing market, with barely any improvement discernible over the same time horizon.

Meanwhile the latest projections suggest that Tasmania's housing market demographics could potentially worsen quite appreciably in the years leading up to 2035, although such longer term projections by their very nature tend to be less than reliable.

While this is a blog post predominantly concerned with demographics, it's worth considering for a moment how the above findings tie in with the dwelling construction cycle.

Two of the "X-factors" which have impacted this housing market cycle have been an explosion in the volume of Asian capital invested in the Australian market and a hitherto unseen shift towards multi-unit construction.

Although 2015 will likely prove to be the market peak for dwelling starts, dwelling completions will remain elevated for the next few years.

In combination with a slowing rate of population growth, this will be one of the factors together with an erosion of yields which will eventually bring the current growth cycle to its end.

Since natural population growth and net overseas migration will take some time to absorb the excess dwelling stock, this also points broadly towards 2021-2027 as a likely period for housing market growth. 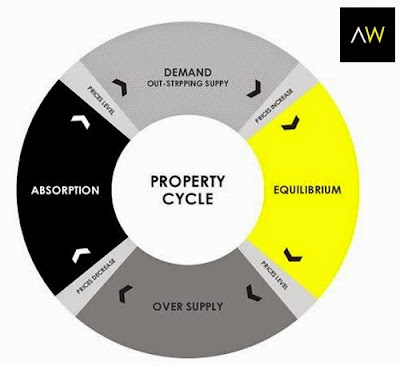 While the latest data suggests that over the short term Australia's populaton growth is likely to continue to slow, over the very long run the demographics of Australia are exceptionally compelling, with the population potentially set to almost double by over the next half century.

Also note that immigration is projected to keep the headcount in the potential homebuyer age brackets expanding to heights that agents and other industry participants can only dream of today.

The chart above implies that with the demand for capital city property likely to approximately double over the very long run, the likelihood of capital city land values in the landlocked inner- and middle-ring suburbs remaining anything less than singularly expensive appears quite remote.

Of course, it isn't possible to forecast or time markets so accurately, but over the near term there could easily be a relatively weak period ahead for housing markets as dwelling completions overtake demand, before a potentially strong rebound running broadly between 2021 and 2027.

The most interesting and useful findings are those which incorporate the shifting composition of net migration at the suburb level, though I don't post detailed suburb research on my free blog page.
Posted by Pete Wargent at 07:37