Ultimately dwelling prices are partly a derivative of the value of the land which sits underneath.

And capital city land values in particular are roaring higher.

It showed that land prices jumped another 4.1 per cent higher in the March 2015 quarter.

Nationally residential lot values have increased by around 19 per cent over the past 5 years. 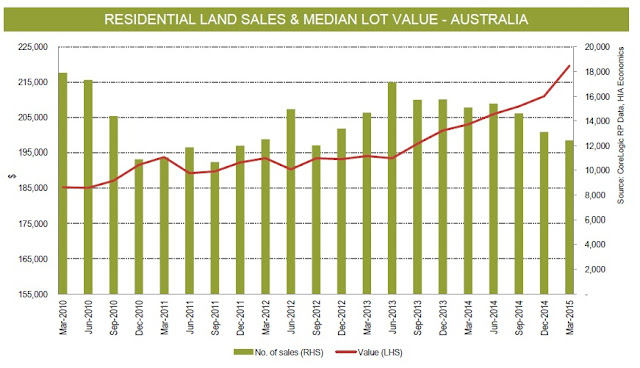 On a national basis lot values increased by 4.1 per cent over the March quarter to be 8.2 per cent higher year-on-year.

We already saw from the 2014 figures that the increases have been driven almost exclusively by capital city rather than regional markets (where there is considerably less pressure on land values).

The HIA made this very point abundantly clear in its Q3 2014 release when it noted:

""We have seen weighted median lot prices in capital cities which well outpaces that for regional Australia".

According to the HIA-CoreLogic RP Data release, a major driver of higher land values has been the lack of shovel ready land.

Transactions fell by 5.2 per cent in the March quarter to be 17.6 per cent lower over the past year.

Land sales peaked in the June 2013 quarter but have declined by around 30 per cent since.

I previously took a look at what is happening to Sydney land values in particular in this blog post here.
Posted by Pete Wargent at 13:04