CoreLogic-RP Data released its preliminary auction statistics from the weekend.

It showed that since the third week of February auction clearance rates have continued to track higher than the equivalent weekends of the prior year.

Despite the "doom and gloom" predicted for property markets the combined capital city clearance rate of 77.8 per cent continues to run appreciably higher than the 65.5 per cent achieved last year from a similar number of auctions. 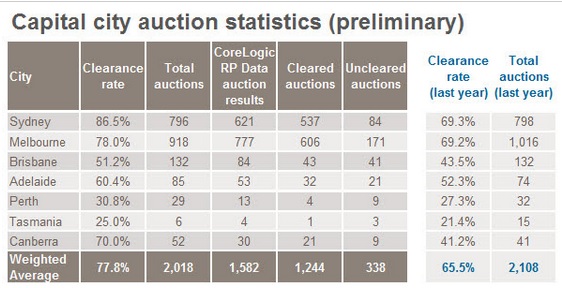 This continues a long recovery since the national market nadir in the first half of 2012.

In particular, the Sydney market is tracking at close to record levels in terms of its auction clearance rates, with another massive 86.5 per cent preliminary clearance rate reported.

One of my favourite picks of recent years - Wollstonecraft on Sydney's lower north shore - is now beginning to deliver a number of thumping results.

A two bedroom apartment located close to the train station on Belmont Avenue, with a guide price of $950,000, sold for more than $1.3 million on Saturday, some $281,000 above the reserve price.

There was also a massive apartment sale result on adjacent Milner Avenue.

Its heady stuff on the lower north, and the market must surely be approaching its peak some time soon, although exact timings are forever unpredictable.

No fewer than six of Sydney's sub-regions saw preliminary auction clearance rates clubbing at above 90 per cent.

There are far fewer auctions held in Brisbane, and as such auction clearance rates are a considerably less useful indicator of market sentiment.

Nevertheless over the medium term a definitive trend can be picked out, with the market grinding out a long, slow recovery since the floods of January 2011.

I have spent several years cautioning on this blog about the weakness of the Adelaide economy and underlying labour market, with no net employment being created at all in the state for more than four years.


Nevertheless, a lack of building combined with low interest rates has seen vacancy rates tightening, and the indicators seemingly do point towards moderately rising prices, including the medium term trend in auction clearance rates.

The property markets of Melbourne have continue to defy gravity, supported by low interest rates, despite approvals being pushed through for record volumes of apartments.

The 78.0 per cent preliminary auction clearance rate for Melbourne was also higher than the 69.2 per cent result reported for the equivalent weekend in the prior year.
Posted by Pete Wargent at 08:16