The Reserve Bank of Australia (RBA) released its Statement on Monetary Policy (SOMP) for May 2015 this week.

As had been widely expected GDP Growth to December 2015 is now forecast to be lower at 2.5 per cent.

These downward revisions justify the rate cut that was delivered last week and indicates that stronger levels of growth are expected to take longer to return than had previously been forecast.

As you can see from the RBA's chart below, growth is not expected to return to above trend until the middle of 2016, with the weaker dollar expected to help strengthen demand. 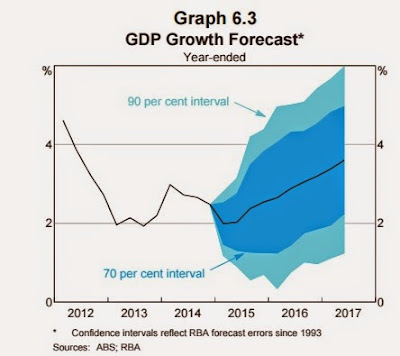 The lower growth will partly result from a significant decline in resources capital expenditure, and partly from coal mining companies which are struggling to compete following a collapse in the commodity price.

Perhaps more interestingly, the RBA's inflation forecasts have also been chopped down to the bottom half of the 2 to 3 per cent target range.

The 2016 underlying inflation forecast has been revised down to 2.25 per cent, and so too has the forecast to June 2017. 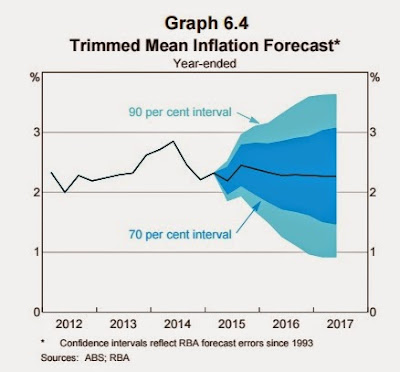 Remember, the SOMP predicts that capital expenditure will be weak, and growth will not rebound for some time.

There are clearly some risks to the downside, particularly given that the decline in capex could yet be sharper than expected.

Crucially with inflation forecasts revised down to just 2.25 per cent this potentially affords the scope to ease monetary policy further still should conditions thus require.

In its own words, the RBA will "adjust policy as needed to foster sustainable growth in demand".

While there are some concerns about what lower interest rates might do to property markets, the SOMP states quite clearly that only in Sydney and to some extent Melbourne have there been signs of genuinely heated markets to date.

The view on property markets in general indicates that the RBA is not unduly concerned.

Although there is potential for a further cut to be delivered, absent shocks it appears to be more than likely that rates will now be left on hold for most of the remainder of 2015 as the Reserve observes the impact of its most recent easing.

Futures markets are currently pricing the odds of a rate cut to 1.75 per cent by the end of the calendar year as an each way bet at about a 50 per cent chance.
Posted by Pete Wargent at 20:10