The Westpac-Melbourne Institute Consumer Sentiment Index was out of the traps today, and pleasingly it bounced to its highest level since January 2014 at 102.4.

This is the first time that sentiment on this important survey has been in positive territory (above 100) since February, marking a federal budget which just about managed not to spook consumers, combined with the positive impact of an interest rate cut.

Interest rate cuts can do this sort of thing; it will be of greater interest to see whether the impact sticks. 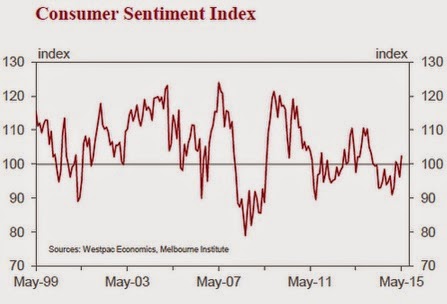 The headline result masks an increasingly gaping divergence between the states.

Sentiment in Western Australia confidence dived by 7.7 per cent from 98.8 to 91.2, reflecting weakness in the iron ore price and the wider state economy, which may result in a credit rating downgrade in due course.

On the other hand confidence in New South Wales is sky high on the back of a robust Greater Sydney economy, romping higher from 105.9 to what cricketers would refer to as a "Nelson", at a neatly symmetrical 111.1.

The strong post-budget result mirrors the finding of the Roy Morgan survey released earlier this week.

However, with the iron ore price looking weaker again and the decline in engineering (i.e. resources) construction set to accelerate, futures markets are still toying with the idea of another interest rate cut in this cycle, at close to a 40 per cent chance.

Observers should not be fooled into thinking that just because interest rates are low that they cannot be moved lower again.

The cash rate futures implied yield curve is pricing a cash rate of no higher than 2 per cent all the way out until the end of 2016.

Communication from the Reserve Bank seems to have been somewhat muddled of late, with the easing bias having been removed, and now a "mild" or moderate easing bias reinstated.

The Minutes to the May 5 Board Meeting released yesterday indicated as such:

"Members agreed that, as at the time of the reduction in the cash rate in February, the statement communicating the decision would not contain any guidance on the future path of monetary policy.

Members did not see this as limiting the Board's scope for any action that might be appropriate at future meetings."

In other words, if the outlook deteriorates, there is room to move down again.

However, it seems unlikely that there will be any chnage in the cash rate until at least August as the impact of previous cuts is assessed more fully.
Posted by Pete Wargent at 15:23